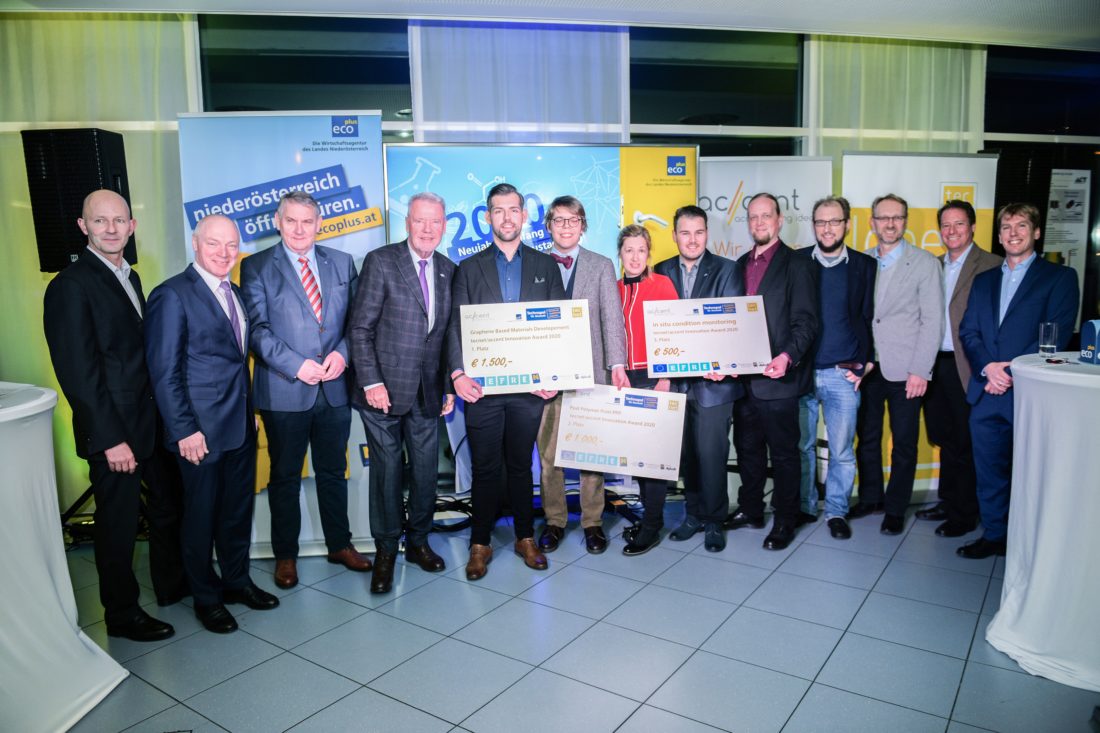 Yesterday, around 100 representatives of the R&D community at the Technopol Wiener Neustadt started the new working year with the traditional New Year’s reception, during which the tecnet/accent Innovation Award was also presented. “The New Year’s Reception is a good opportunity to review the highlights of the past year and then look ahead to the future. Especially here at the Technopol Wiener Neustadt, the University of Applied Sciences, the resident companies and the research institutions have been able to achieve great success. This provides us with the best possible conditions to ensure that 2020 will also be an outstanding year for Wiener Neustadt as a location for education, research and innovation”, ecoplus Supervisory Board Chairman Mayor Klaus Schneeberger and ecoplus Managing Director Helmut Miernicki agreed.

An important basis for Wiener Neustadt’s continued success are young, committed researchers. Three teams were awarded the Innovation Award, a joint initiative of tecnet equity, accent Inkubator and ecoplus, at the New Year’s reception. The prize, which was awarded for the third time this year, encourages young scientists to think about the commercial exploitation of their research. Accordingly, the jury’s evaluation did not focus on the content of the projects, but on the strategies for commercial implementation.

First place went to Peter Velicsanyi with his project “Graphene Based Materials Development for Innovative Aeronautical Applications”. Peter Velicsanyi from CEST has developed novel graphene based materials with a wide range of potential applications. The research results could make an important contribution to reducing CO2 emissions from aircraft. For example, new, innovative aeronautical applications could be conceivable here, which could reduce the total weight of aircraft and thus ultimately also reduce fuel consumption. It would also be possible to use the new materials in other types of aircraft, trains, cars or ships in future.

The “PostPolyPrint (PPP)” project came second. Bernhard Lutzer and Lidija Rafailovic have developed an innovative pretreatment and coating process for 3D printed plastic components. The process developed by the CEST researchers could in future be used to develop components from the 3D printer with new technical properties (e.g. chemical functionality or resistance to external influences). Potential applications range from replicas of valuable jewellery to particularly light and stable aerospace antennas and novel lightweight heat exchanger systems for automotive applications.

Any cookies that may not be particularly necessary for the website to function and is used specifically to collect user personal data via analytics, ads, other embedded contents are termed as non-necessary cookies. It is mandatory to procure user consent prior to running these cookies on your website.